Frisket Is Our Friend (It's Not Just for Airbrush) 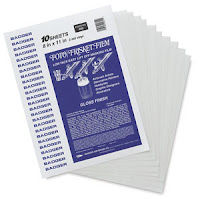 Let's start by talking about masks. Creating masks has always been standard practice for airbrush artists. A mask allows the artist to create an object or shape with a crisp edge while protecting the rest of the work from over-spray.

Though I gave up airbrushing* years ago, I still use masks when I paint with acrylics. If I have a foreground object that is complicated or needs to be precise, I mask it out. The mask allows me to paint in the background without covering my foreground drawing. The background stays consistent and smooth, which is much harder to achieve if I have to paint around foreground objects.

The best product for making masks is frisket film (sometimes called frisk film). If you are not familiar with it, frisket is a thin clear film with low-tack adhesive on one side. It is similar to clear contact paper but thinner and less sticky. Badger, Grafix, and Iwata all make frisket film. It comes in sheets or rolls and is available through all the regular suppliers.

Here is a step-by-step of a recent acrylic painting using a frisket film mask...

1) Using graphite paper, I transferred my sketch to a piece of illustration board (the final size of the artwork is 10" x 8.25"). 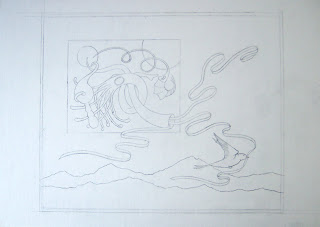 2) I wanted to paint the largest area of background (sky and mountains) first. The easiest way was to cover the entire art area with a piece of frisket film and cut away the background. Below, you see the whole art area is covered with frisket film. 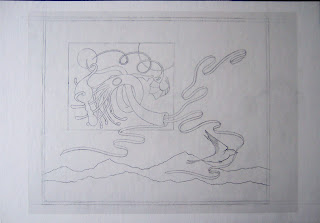 3) Next, using an X-acto knife, I cut and removed the film from the background area.

I used a ruler for the straight edges and cut the rest free-hand. It takes a little practice, mostly just patience, and always use a sharp, new blade. Usually frisket film is thin so you don't have to press hard to cut it. Here you can see that only the foreground objects and the outer border are covered with a frisket film mask. 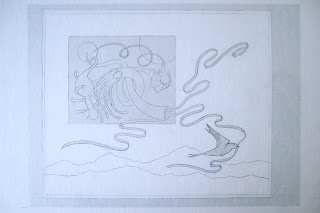 4) I added masking tape around the outer edge just to extend the border (it doesn't matter much if you are matting and framing a piece but if you are sending it to an art director, it looks more professional to have a clean edge). Then I painted the background - sky and mountains. If this was a larger piece, I would have masked out the mountains and painted them after the sky was finished. 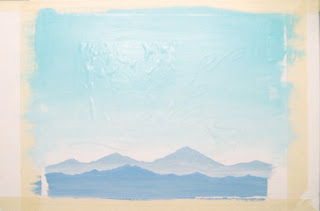 5) After the paint was thoroughly dry I removed the masking tape and carefully removed the frisket film. I got it started by picking up one edge with the X-acto knife. 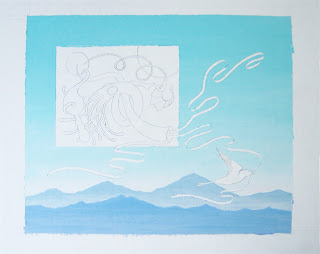 You can see that some of the paint seeped under the film. This will happen if your paint is thin (or, like me, you use a hair dryer to speed things along and the frisket buckles). Since I'm working opaque, this is not problem - it will be covered. What I wanted to achieve was to paint a smooth sky and keep my drawing more or less in tact. If I was sending this to an art director, I would clean up the outer edge with some opaque white.

If you are concerned about paint seeping under the film, Iwata makes a product called Art Mask Frisk Film. It is a medium tack film that promises not to lift up paint when removed and is good for porous surfaces. This may help - I have not tried this particular product yet so I can't say if it is any better. (If anyone has tried it, let me know how it worked)

6) The next area I wanted to paint was the background of the square. There's a lot of little negative spaces in there and, again, I wanted to keep my drawing in tact. I covered the square with frisket film and cut away the background. Here you can see that the objects within the square are covered with a mask. 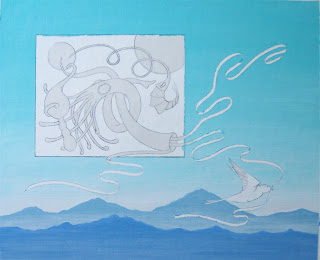 7) Next, I painted the background of the square... 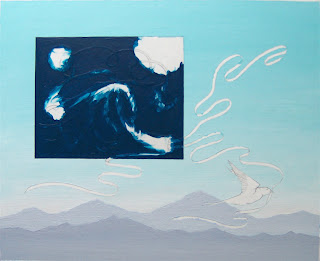 ...and carefully removed the mask. 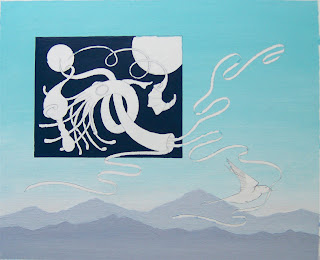 This is a small piece so I was able to paint the rest freehand. Of course you can make as many masks as necessary. In a larger piece you could certainly use more. 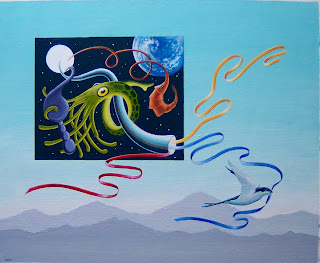 For this particular example I was able to paint the two main background areas without covering the foreground objects. Blending is always a challenge with acrylics since they dry so fast - using a frisket film mask was an easy way to paint a gradated sky.

So the next time you pull out your acrylics consider trying frisket film - it's not just for airbrush.

*Personally I like good airbrush art, it's just something I never mastered.**
**Okay, when I say "never mastered" what I really mean is "totally sucked at."
Posted by Cindy Samul